The History of Baccarat

The History and Origins of Baccarat

Baccarat has a long history which stems back to Middle-Ages France or Italy (depending on whose story you believe) and eventually carried on to modern-day physical and online casinos. Although the rules may have changed over centuries and cultural interpretations, Baccarat still remains a game of choice for many gamblers captured by its potential for big wins and lucky streaks.

The most well-known origin story sees an Italian gambler, Felix Falguierein developing the game using Tarot cards and basing it around an ancient Etruscan legend where a blonde virgin had her fate decided from tossing a die in front of nine gods. The virgin’s fate was determined by her nine-sided die; if the number was an eight or nine the woman would become a priestess, if the die showed a six or seven she would be banned from any further religious involvement and if the number was less than five the virgin would be made to walk into the sea to her death. Whether Falguierein was the true creator of Baccarat (which can be translated to mean ‘zero’ in both French and Italian) or not, the French nobility were known to play a version of the game as far back as the 15th century. 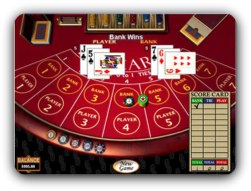 English gamblers discovered the pastime and began playing the French iteration of Baccarat (called ‘Chemin de Fer’) before slightly altering its structure and creating ‘European Baccarat’. Both of these styles still enjoy popularity in Western European casinos right into the era of cultural exchange typified by European imperialism and colonialism. The game of Baccarat would go on to enjoy global success in its original forms, spreading across national boundaries and distinct interpretations although what is perhaps the most successful version was brought to the United States through a South American man who combined both French and British styles.

‘American Baccarat’ (which saw many of its rules translate into the well-known and most common version of ‘Mini-Baccarat’) was brought north by Tommy Renzoni after the 1950s closing of Havana, Cuba casinos. The game caught on quickly and soon the Dunes Casino in Las Vegas was offering players a relatively new style of table game to learn. Those who could partake early on were often within the upper-echelon of society and they were drawn to the big risks and ornate traditions present within the game. As mini-baccarat was later introduced it became much more possible for the average gambler to enjoy the new form of game with drastically decreased limits and greater speed of play.

From Tarot cards and ancient rituals to internet casinos and loud tables Baccarat has emerged as one of the oldest known gambling games. Online casinos have seen mini-baccarat make the digital transition seamlessly with the game enjoying a main place at every virtual destination. Due to this style’s fast play and fairly low buy-in betters are sure to catch a lot of excitement even if they’re short on time and this trait has no doubt aided in its internet popularity. As it continues to enjoy great success in the digital era there seems to be no end in sight for the game of Baccarat.