The History of BlackJack

The History and Origins of BlackJack

The game of Casino BlackJack can be traced back to French leisure halls from as early as the beginning of the 18th century where it existed as “vingt-et-un” or “twenty-one”. Eventually BlackJack came to the United States via the sharing of ideology and culture in the era of the French and American Revolutions where it ultimately found greater popularity with the addition of different payout rules and rewards tailored toward a player having the ‘perfect’ hand of an ace and a black jack (worth ten and hence creating the smallest possible combination for reaching twenty-one). 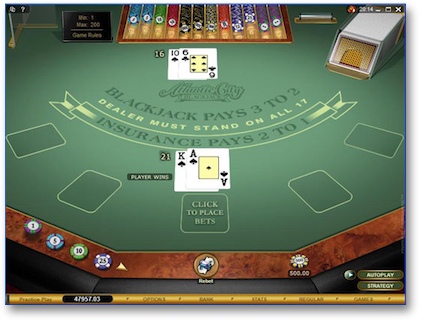 It is from here that the card game received its most commonly used name of BlackJack. As BlackJack became a mainstay of North American Casinos it soon spread to find prevalence across the rest of the world to the point that is one of the easiest and most popular betting card games across the contemporary globe.

Over time the early American jackpot created for the BlackJack and ace hand disappeared but the name stuck as the title for the successful card playing style. The game’s possibility for a large payout and quick play made it a famous one in the early United States before it was banned as part of an American moral panic regarding the ethics of allowing legalized gambling. This would not be the death of BlackJack however as it quickly found its way into the newly legalized Casinos of Las Vegas, Nevada after state law changed in 1931.

One of the reasons that BlackJack may have maintained such popularity is its immense possibilities for serious gamblers to formulate odds and theories regarding beating the house for a maximum jackpot. Although Poker may attract more attention from card players, BlackJack has long been the game that most serious betters are interested in learning in depth. In the mid to late 1950s the statistics of reducing a BlackJack dealer’s edge would be studied by Roger Baldwin and a team of similarly interested players. Throughout the 1960s BlackJack was studied to the point that Casinos were forced to revise rules in light of the New York Times bestselling card counting book, Beat the Odds written by Professor Edward O. Thorp. The Casinso attempts to counter the use of science and math to win BlackJack would ultimately be to no avail as the infamous MIT BlackJack Team (detailed in the bestselling novel Bringing Down the House by Ben Mezrich and the 2008 film 21) would go on to learn the nuances of card counting and profit million of dollars before being banned from casinos by a team of private investigators hired to identify overly successful card counters.

With the modern emergence of Online Casinos as many gamblers favorite avenue for convenient games BlackJack has continued to maintain a presence as an extremely popular method for playing cards. Its easy method of play and complex betting system ensure that it will not be disappearing anytime soon as new betters discover the enjoyment of the game every day.