The History of Craps

The History and Origins of Craps

The history of Craps is a relatively recent one in comparison to many other popular casino games but its rise to success is definitely worth note. Craps comes from the earlier game of ‘Hazard’ which shared similar rules and play however it would be the well-known version played today which would become most successful.

It is difficult to properly trace back the game of hazard but many believe that the French may have come to learn the game through centuries and generations all the way back to a gambling pastime of Roman Legionnaires during the era of the Holy Roman Empire. The Legionnaires would place bets on pig’s knucklebones which were shaped into a form of dice and then rolled on makeshift gaming tables provided by the soldier’s shields. Through the passage of years the game of hazard was refined from these roots and became prominent enough to come along with voyagers and cross the ocean into North America. 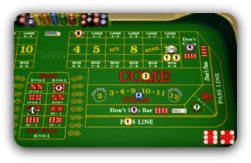 Hazard was often referred to as ‘Crabs’ by the French Acadian settlers of Louisiana, United States. The game was previously enjoyed only by Old World aristocracy after its inception in the 18th century but gained limited popularity among the colonial population. Bernard de Mandeville, a New Orleans man would go on to make hazard a huge success in 1813 when he simplified its rules into what the French would continue to refer to as crabs. De Mandeville’s rendition caught on with steam-boat travelers and would find its way up the Mississippi River where it eventually spread throughout the early nation.

The only major change came when John H. Winn made readjustments to compensate for the early games possible weakness. Cheaters had been able to use fixed dice in order to scam winning money before Winn altered rules which made this much more difficult. It was at this time that the layout of the current betting table was created which would inevitably deepen and enhance the overall play. Crabs soon became more commonly known as Craps due to frequent misunderstandings of French accents pronouncing the original name and with this the modern form of the game was fully established.

Popularity spread immensely during World War II wherein many soldiers played Craps during downtime. During the post-war economic boom and the rise of cinema, Craps became a game frequently referenced and played on screen for even more of the masses to discover. Casinos embraced the new playing style and before long Craps were completely cemented as a hit with gamblers. Although the introduction of video slot machines and their enormous success in the 1990s swayed many craps fans away from the game it has still managed to hold on and even grow in popularity due to the revolution of online play. 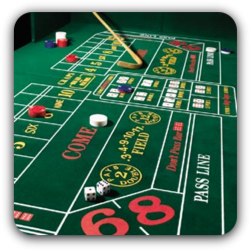 The internet and virtual casinos saw craps make an easy transition. With the international appeal of the game a built-in audience was ready to try out the pastime through computers instead of in noisy and oftentimes stressful gambling businesses. Now the game continues to be a hit for gamblers and digital casinos alike and is often featured as a mainstay attraction to premier online venues. With internet gambling constantly on the rise and craps showing no sign of losing their spot as a favourite of casino fans the game is sure to survive and continue finding new fans across the world.